In response to Washington's inability to come up with a deal to avoid $1.3 trillion in sequestration cuts, National Association of Government Employees National President David J. Holway issued the following statement: At midnight, President Obama signed an order to implement the sequestration cuts which mandates federal agencies to cut their budgets by approximately nine percent and by 13 percent for the Department of Defense.

I am appalled that lawmakers in Washington D.C., have once again refused to do their jobs and act in the best interest of the country. The $1.3 trillion in spending cuts and tax hikes that will ensue as a result of a Congressional stalemate will cause irreparable economic damage. Two million jobs will be lost nationwide, including 270,000 federal jobs, numerous national parks will be closed, small airports will be closed and air safety jeopardized, defense projects which support military readiness will be delayed as a result of these drastic cuts.

Many federal employees will be furloughed for 22 days and see their pay cut by 20 percent. These individuals will not be able to pay their bills, buy groceries for their families, or afford to put gas in their cars to get to work, which will only further weaken our economic recovery. Washington needs to stop playing the chicken game now. The well being of millions of Americans is on the line as a result of the inaction of the lawmakers they elected to make the tough decisions and govern the country. The members of the House and Senate need to return to Washington immediately and find a balanced and bipartisan approach to reduce the nation's deficit and get our country's economy back on track. 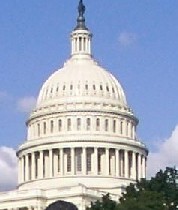 Where trade unions are most firmly organized, there are the rights of the people most respected.